And off to the next one! This time I'm making a pattern from Lutterloh!
Somehow my stash has become full of chiffon and other thin woven fabrics, and since I do need some more tops,
I decided to start using some of it.

The pattern that I'm going to be making is from supplement 286 pattern number 181 and this is how it looks:


After staring at the fabrics for half an hour, rejecting everything and starting all over I chose this beautiful chiffon-ish fabric with a border print I bought a few months ago from one of my favorite online stores: Driessen Stoffen.They are the ones mostly responsible for the mountains of fabric I have! Here's what the fabric looks like: 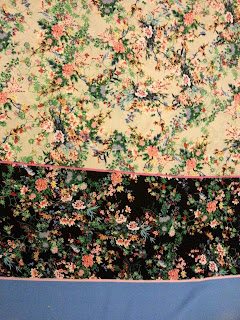 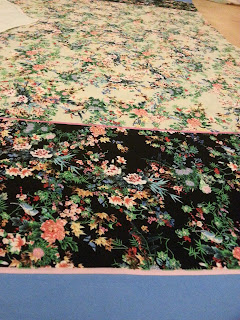 I drew my pattern and, as usual, I made my short-person adjustment: removed 4cm length above the waist for both front and back pieces. I usually also have to raise the bust dart as well but on this pattern it looked good enough where it was placed, we'll see how that goes I guess 😁.

I also decided to cut the back on the fold as well, so instead of drawing that back curve on the mid back, I just drew a straight line from the neck mark to the bottom mark. I also left the back darts out since I didn't want to put a zipper on the blouse.

After I measured the width on the bottom of my paper pattern ( I always measure at least the hip width before I cut anything, what a pity it would be if it wouldn't fit in the end!), I decided to add 1,5 cm on both front and back pattern pieces, so that makes a total of 6 cm added width to the circumference of my blouse.


Aligning  the stripes was easy peasy since there were only a few of them.


Now to the construction: Sewing front and back pieces together, nothing special there, but then we come to the neckline... In the picture it shows the blouse with a metallic cylinder thingy that I don't have nor have I any idea where to buy one. So I decided to grab a leather look band that I had, fold it in half , stitch it and use that instead.


Here comes the part where I had to figure how to attach that to the front of my top which was more complicated than I thought. That little piece you have to sandwich between the front neckline and the facing. Putting it on both sides in between and then stitching all around won't work, this way you can't turn your facing under the neckline anymore 😕.

Instead, you have to sew one side first then take that side, twist it around and place the other end of that little strip in between the other side's facing and front neck ( I hope this makes sense...!). For some reason I didn't make any pictures of that, probably because I wasn't sure if that was going to work 😬.

I liked how the neckline was stitched all around a few centimeters from the edge on the picture/drawing so I wanted to do the same. Whoever has ever worked with chiffon knows that it can sometimes be hard to manage and make it stay in place... At this point I came across that problem 😩. After pressing the neckline (which was a bit of a challenge because eh... see above!), I pinned it, measured 2 cm all around and marked it to make sure that my stitching was perfectly straight. Guess what, it wasn't! It was a mess... The fabric was shifting and moving so I ended up taking it out and redoing it and this is the result:


The thread color was fortunately quite forgiving! Good enough right?😐  Well, that's the best I could do!
Next, stitch the sleeves and add the little blue borders and in the process a nice blood stain on the inside of one of the sleeves because a pin was mean to me 😢


I guess I can say I'm quite happy how it turned out even though it's a liiittle bit tight around the bust. I'm really glad I measured the hip circumference before cutting, as you can probably see, it was kinda needed 😌.
Nice pattern, everything as it supposed to be, I might even make one more of those although I'd go for a different fabric, viscose perhaps?

Hmm, what should I make next? 😬