I shall and will make Maya work! 😏

I believe I have by now discovered my right bra size and it's not the size I used to make my 4 previous Mayas...!
So let's try the right size this time. I was thinking of making the Maya in 75F, but since the band has been too loose for my liking on the previous ones, I thought instead of shortening the band, why not make a 70G instead? So that's the size I printed and started making my ''usual'' changes that I need to make. The bridge width and height I adjusted according to the previous Maya, shorter and narrower since I know it fit quite nicely before. For the rest I left the pattern as is, can't make any more changes if I don't yet know how it will fit.

Since I'd rather keep the decent materials for bras that I know will more or less fit properly, from now on I'm going to be making test bras with every new pattern/size or big changes in a pattern!

That's what I did here as well, unlined, no padding, let's see where the problems are with no foam covering up the problem areas!

And then I was speechless!
It fits almost perfectly😲😅! The cups fit perfectly, no wrinkles, no bulges! They are too high but for the rest 😲 At this point I am surprised by the fact that another (theoretically) 75F fits me almost perfectly. I have been wearing 2 sizes too small bras for way too long without even realizing that this was the reason they were uncomfortable.
Further on the fit, as I said, the cups seem too high and so does the underarm area. The bridge probably needs to be maybe 5mm narrower and 1cm shorter. Minor changes really that are easy to do!

I decided to show you my test bra on Roxanne, she ain't shy like me! Of coarse she's not the ideal model but I think you can, for the most of it, get the idea. As you can probably notice from the pictures, I've already started using parts of this test bra, it has no wires anymore! 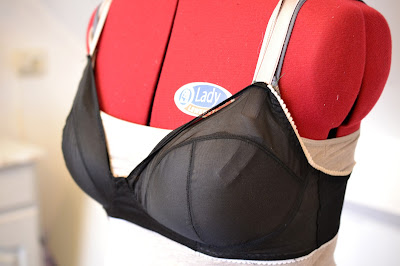 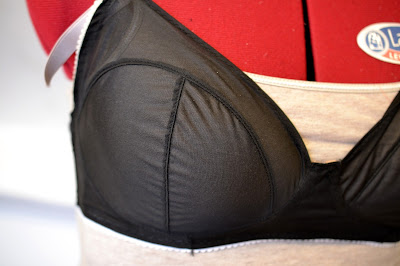 Even though I know I'd probably have to make all the above changes, I decided to go ahead and make it again as is but with padding this time, since I know that with padding the fit might somewhat change.

For this version I used bright fuchsia lycra, dark green lace and 6mm padding. I thought the contrast of the 2 colors would come out looking pretty. In the end I wasn't amazed by my color combination but, oh well! 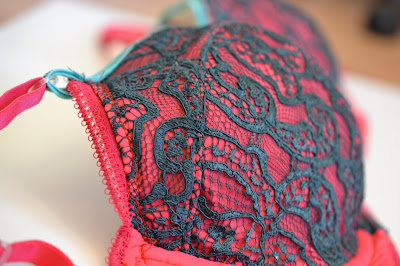 As suspected before, I do have to make all the changes I mentioned above. The cup comes way too high and the strap and underarm areas are irritating! The bridge is also too high and wider than it should be and there's something weird going on with the underwire area😕 but I'll come back to that later!

What to do,what to do...? Oh, I know! Ima gonna chop a piece off!😁😝
Bye bye lace scallops - hello fold over elastic! I removed with precision (aka chopped off a piece ) about 2 cm off the top of the cup and the bridge and some out of the underarm area, now it's not gonna be poking me anymore since the strap position is now moved inwards and the underarm area lowered!
The only way to finish off the top of the bra now was fold over elastic, I had no perfectly matching color so this green was good enough!
And it worked😂! The bridge ended up slightly stretched out but now I have a bra that I can at least wear without being stabbed in the armpits!

Unfortunately I didn't take any pictures before I cut the top part of the bra off, I tend to forget taking pictures while I'm busy with it!😬 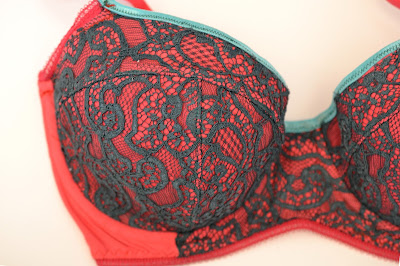 Now about the underwire area, it all is not stable enough again...😡 On my test bra it was perfect.
I asked around a bit in my favorite bra and lingerie making groups and I got a few ideas why this might be happening. A possible problem could be the thickness of the foam. One of the suggestions was to add 5mm extra seam allowance at the underwire side of the foam pattern pieces.
There was also one more thing that was different between my test version and this bra: the cradle. The cradle on the test bra was made with a stable fabric whereas the fuchsia one only has the lycra. The bridge I of course lined with bra tulle but apparently that wasn't enough. 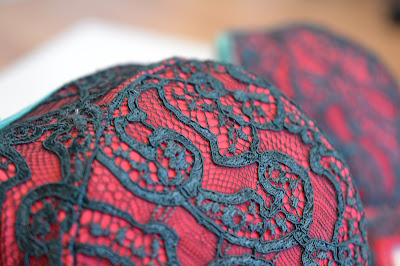 Now I have a good idea on what to try next to fix this problem. Stabilize the whole cradle and make some kind of  a change to the foam cups. 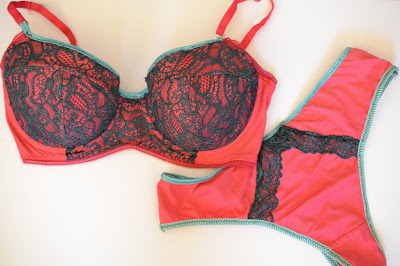 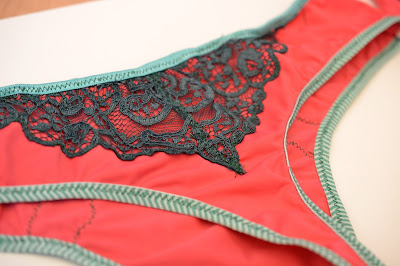 Oh yes, and of coarse matching undies for this bra as well! I only have that one pattern that I keep tweaking and changing the styling of, It actually fits quite nicely! 😊 (Don't judge my stitching, I didn't have matching thread and sometimes I ain't that neat, I just want to finish it 😟😋)