An attempt to diagonal cups

Back from vacation and ready to continue my bra making adventures!

I couldn't wait to give the diagonal cup a try in the hope that it'd look better than the horizontal cup draft😋.

I followed my book again (which, to be honest,at times I find unnecessarily complicated), and altered my pattern. My knowledge is still limited when it comes to how patterns should look so I assumed it was ok.
Initially I started making a soft bra again but, if you've read my other posts, you know I'm not really a fun of them since, despite my bra size, I still got lemons!😅
I had already cut my lace out and was about to start putting my bra together when I decided I'm gonna make it with padding! For the padding I added the same seam allowance at the wireline as for the lace ( and not +1cm that I normally add), I thought, this padding is quite thin, it should be fine.
I also moved the strap position 1cm outwards since above the apex didn't do it for me. 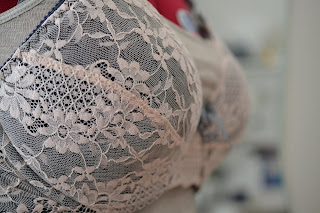 The result? Meh...😐 I mean... I like the color combination and the lace is beautiful but... The cups are a bit small, the straps are still too far inwards and the apex is too low... And now I have another sleeping bra...😂 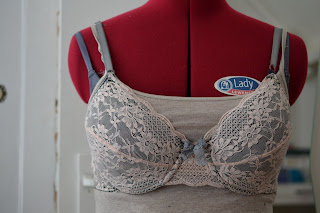 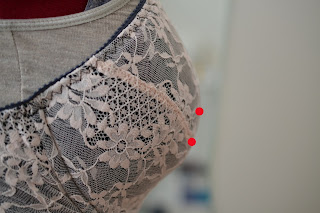 In the last picture you can see where the apex is supposed to be and where my cross cup seam is, with as a result: downward pointing boobs!👀
I thought the apex being too low was my mistake since I added less seam allowance than usual ( and less than the book suggests). The strap position...well, apparently the ''ideal'' strap placement is above the apex but that doesn't work for me, it just looks weird!

So I decided to try and fix one problem at a time, starting from the apex issue.
Since I f@cked up the seam allowance on the last one, I started again, making another bra but this time with the right seam allowance added. At that point I was sure that this was going to fix that problem and the fact that the previous one was a bit small.
I scored some push up underwires on my vacation and thought this would be fine to try with this bra as well since all I gotta do is lower my bridge and my upper cup a bit. (Spoiler alert: it didn't go that well!)
So I started all over again, cut my stuff, put it together and.... it's worse! 😕😡 It looks like a misformed triangle bra that got run over by a truck💩... 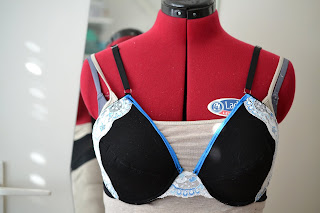 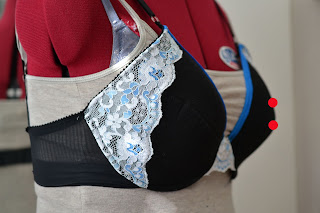 Again the dots show where the apex should be and where it is... Even lower than before somehow (?)
I find this so ugly that I don't even want to use it as a sleeping bra, to the bra graveyard it goes!👎
The apex is still too low, the straps are too far towards the center and there's excess fabric/padding at the outer sides on the seam line.  I think I have to start from scratch, remeasuring and all and keep my cross cup seam lines a bit straighter.

So yea... that's how well that went, I need to take a break from this, make a couple of pretty things first and then start again!


I want to add as a footnote that this post was written a couple of months ago and after these 2 disasters, I decided to not continue with this book since nothing fit me properly (I also tried to make panties and a top) and, even with my limited knowledge, I disagree with the way some things are supposed to be cut/fit. Also, as I already mentioned, I find it unnecessarily complicated.
More about what I decided to do and how to continue on the next post 😊!